Éomer was a captain of the king’s cavalry, Marshal of the Mark, and one of Rohan’s mightiest warriors. He bravely fought alongside King Theoden against the forces of Mordor at the battle of Helm’s Deep and on the Pelennor Fields, skillfully wielding his sword, Gúthwinë, and hurling his great spear. He was recognized by his kinsmen on the battlefield by the long flowing horse tail that crested his great helm. This authentically detailed replica is a reproduction of the actual filming prop built by Weta Workshop and used in "The Lord Of The Rings" films presented by New Line Cinema. The helm is crafted of reinforced polyresin and genuine leather, with precisely-molded details and coloring. The horse hair crest is synthetic horse hair. 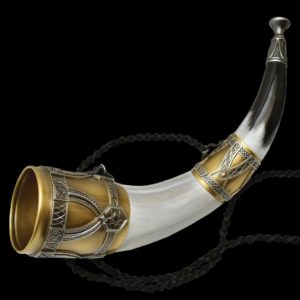